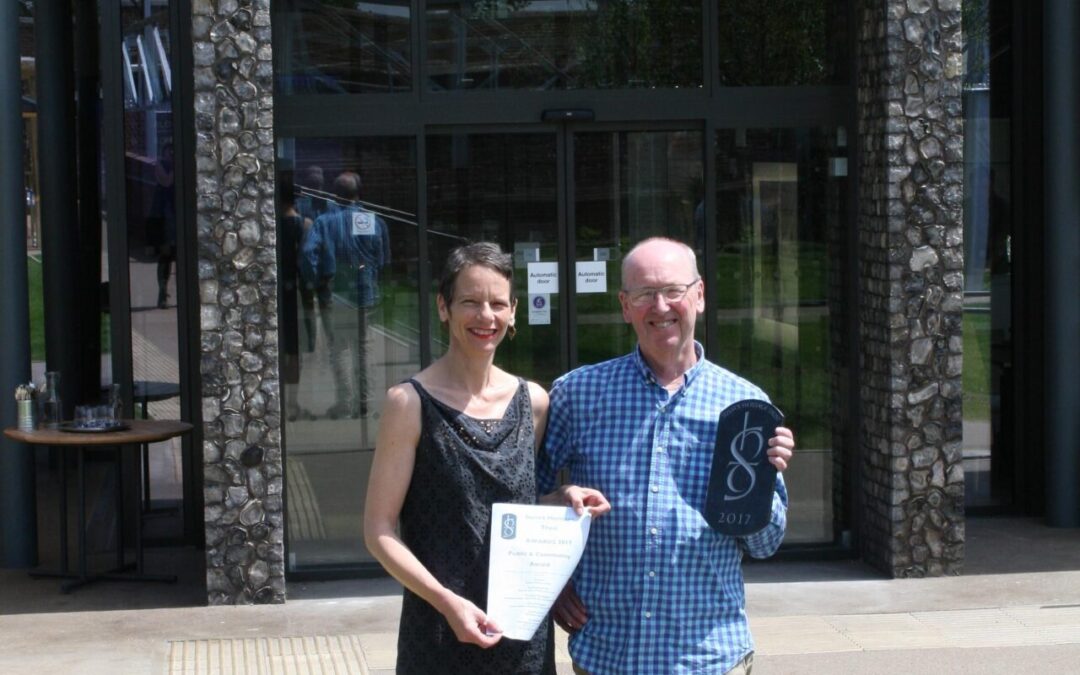 A chance meeting between two Lewes residents who share a passion for cinema resulted in the purchase of a once redundant warehouse and the creation of a multi-million pound award-winning independent community cinema.

The brainchild of Carmen Slijpen and Robert Senior, Depot, Lewes, has been recognised by The Sussex Heritage Trustin its 2017 awards as ‘a community amenity performing functions far beyond the cinematic experience.’

In fact the Trust has awarded Depot twice; once in the Public and Community category, where it was noted that ‘the building retains most existing features recognising the local history and importance of the site’, and also in the Building Crafts category, where The Sussex Heritage Trust acknowledged that the unique use of flint in the build ‘forms an important part of the contextual design for the Depot Lewes, rooting it through craft traditions, in its locality.’

“We are delighted that the Depot Cinema has won the 2017 Sussex Heritage Trust Award in the ‘Public and Community’ category.  We set out to design the cinema as a thoroughly contemporary addition to the much loved locally Harvey’s Depot building which is retained and still highly visible from Lewes Station. We have adapted the shell of the building to accommodate three new screens with a foyer restaurant, education and other facilities added to meet the expectations of today’s cinema audiences.

“We have integrated into the final design of acoustic panelling in the cinemas the expressive figures, initially painted on to the walls of the unconverted depot by Julian Bell, in celebration of local creativity, interest and involvement.

“Throughout the entire process Robert, Carmen, and all of their team, have fully supported us in our commitment to high quality design, sustainability and accessibility.

“It has been a pleasure to work with them to realise their vision. We are thrilled too that the Depot has been so warmly received by cinemagoers who see the Depot Cinema playing an important part in the local community for many years to come.”

Of the latter award David Smith, of The Flintman Company, said: “Being based in Lewes it was a privilege for us to be asked to work on this unique project. We wanted to use this opportunity to challenge ourselves and create a distinctive flint building for Lewes that uses an amalgam of styles never used before.”

The work included a combination of random knapped ﬂint with knapped ﬂint quoins and coursed knapped ﬂint, for the walls and roof to the education room, and the entrance ceiling drew particular praise for its unique composition.

“It’s always nice to get recognition for your work,” added David Smith, “and the feedback and comments we’ve received from the both the public and the industry make the time, effort and dedication of our staff all the more worthwhile.”

Depot, which is an independent community cinema and cafe-restaurant run as a charity, Lewes Community Screen, only officially opened its doors to the public on 27th May 20017.The complex took one month to achieve one its main goals; to sell-out all three screens in one sitting.

Depot Creative Director, Carmen Slijpen, said of the achievement: “It’s unbelievable that in just one month we went from people tentatively poking their heads around the door, to many returning again and again. It’s a testament to everyone’s hard work and dedication.

”The day after the screen sell-out Depot reached another milestone when, as only one of a select number of cinemas, it screened the UK premiere of Alone In Berlin, live from The Imperial War Museum.

This was followed by Depot offering the full Glyndebourne experience when Hamlet, in operatic form, was screened by the cinema live from the iconic opera house.

“Depot is delighted to be the recipient of this year’s Sussex Heritage Awards,” added Depot Chair of Trustees Robert Senior. “We knew there would be endless possibilities associated with the new cinema and that’s what has made it exciting.

“We’ve gone from strength-to-strength over the last few months and we are committed to promoting film as a life-enhancing and educational experience.

“The recognition of the building work reflects the attention to detail of the overall experience we offer visitors. Come to Depot and eat, drink, be entertained and be educated.”