Depot to screen Dispossession: The Great Social Housing Swindle with director Q & A 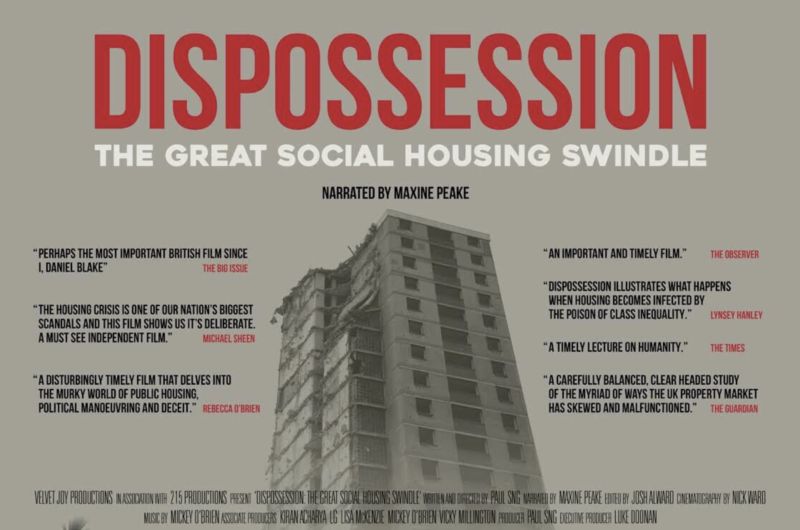 Depot is to host five special screenings of Dispossession: The Great Social Housing Swindle, featuring a Q and A session with the film’s director.

Billed as ‘perhaps the most important British film since I, Daniel Blake’ by The Big Issue, the film is a feature documentary directed by Paul Sng (Sleaford Mods – Invisible Britain) and narrated by Maxine Peake, exploring the catastrophic failures that have led to a chronic shortage of social housing in Britain.

Dispossession: The Great Social Housing Swindle focuses on the neglect, demolition and regeneration of council estates across the UK and investigates how the state works with the private sector to demolish council estates to build on the land they stand on, making properties that are unaffordable to the majority of people.

Dispossession is the story of people fighting for their communities, of people who know the difference between a house and a home, and who believe that housing is a human right, not an expensive luxury.

Depot will be hosting four screenings of the film, launching on Saturday 29 July. Wednesday’s screening (2 August, 19:30) is followed by a question and answer session with director Paul Sng, sociologist Lisa McKenzie and Emily Clarke from Lewes Labour, who fought as a candidate in this year’s East Sussex County Council election.

“A timely lecture on humanity” – The Times

“A carefully balanced, clear headed study of the myriad of ways the UK property market has skewed and malfunctioned.” – The Guardian

“An important and timely film.” – The Observer

“The housing crisis is one of our nation’s biggest scandals and this film shows us it’s deliberate. A must see independent film.” – Michael Sheen